Chances are when you think of vampires you’ll think of Dracula, Blade, Angel, or any of the fanged creatures-of-the-night that populate modern culture, including Mara from Love Lies Bleeding. The vampires we’re familiar with are (generally) human looking, powerful, often charismatic and attractive, with a thirst for blood and a dislike of stakes. But that wasn’t always the case. History and folklore are full of vampires that are nothing like what we’ve come to expect. Here are five examples…

Depicted as having a lion’s head, donkey’s teeth, bare breasts, a hairy body, bloodstained hands with long fingers and nails, and taloned bird’s feet, Lamaštu was an evil Goddess of ancient Mesopotamia who preyed on newborns and fetuses in order to suck their blood (among other things). Miscarriages and sudden deaths of infants were blamed on her. Pregnant women could ward her off with amulets, an incantation, or offerings of centipedes and brooches. The offerings were meant to distract Lamaštu, which was a common way of thwarting vampires.

In the Sinhalese culture of Sri Lanka, the Riri Yaka, or “Blood Demon” has an eternal thirst for blood. He’s usually portrayed as being a blood-smeared, ape-faced, four-armed man with a mouthful of decomposing human flesh. He haunts graveyards, crematoriums, and the dying. He can also possess people and cause illness, usually of the blood. People possessed by Riri Yaka are pale, listless, and anemic; a ritual ceremony must be performed to cure them.

Seemingly a normal woman during daylight hours, once the sun goes down the Penanggalan detaches her fanged head and organs from her body in order to fly around the Malaysian countryside in search of the blood of newborns and women who have just given birth. Those who survive being fed on inevitably contract a wasting illness, another common theme in vampire myths. Penanggalan will often disguise themselves as midwives, but can be recognized by their characteristic vinegar smell (they keep a vat of vinegar in their home in which to soak their entrails) and odd behaviour. The best way to get rid of a Penanggalan is to surround doors and windows with thorny branches and thistles, so that they will become entangled and trapped. If found, their hollow bodies can also be stuffed with broken glass or destroyed, which will kill off the head.

Daughter (or possibly granddaughter) of the Greek God Poseidon, Lamia was Queen of Libya and Zeus’s lover before being transformed by his wife, Hera, into a creature that was part woman, part sea monster, and wholly deadly. Described as either stunningly beautiful or hideously ugly, Lamia generally had a woman’s face and serpent-like features. In retaliation for Hera killing her children, Lamia began murdering other people’s children by sucking their blood. Over time she was also said to seduce and devour men. Lamia had the power of prophecy, as well as shape-shifting abilities and magical powers. Eventually the single woman became pluralized into a race of vampiric monsters, the Lamiae. The origins of Lamia may lie in Mesopotamia’s Lamaštu. A modern Greek folk saying explains the sudden death of infants and young children as “[the child was] strangled by Lamia.”

The Mapuche and Chilote of southern Chile have a legend of a shapeshifter that petrifies victims (both human and animal) with its stare in order to then drain their blood. The peuchen can take any form, although it prefers that of a giant, bat-winged flying snake. Only a machi (medicine woman) can defeat it. There may be a connection between the myth of the peuchen and that of the chupacabra.

Have you heard of these vampires? Which do you think is scariest? Tell me in the comments.

Encyclopedia of Beasts and Monsters in Myth, Legend and Folklore

Welcome to Read an Ebook Week, where books are cheap and life is good…

Get LOVE LIES BLEEDING for 50% off

International Women’s Day is coming up, so it’s the perfect time to read books by women (hey, I’m a woman 😉 ).

If you like what you read, don’t forget to leave a rating or review. Pass it on…

TODAY ONLY: Get Love Lies Bleeding for just $0.99!

What happens when a predator loves its prey?

Centuries-old Mara is dying a slow death when she meets Lee, a young man whose life has never belonged to him. Thrown together, they’re forced to fight those who would destroy them and survive a slew of enemies they never expected, even as Mara falls into a downward spiral of delusion and obsession. Will she make a devil’s deal to save both their souls? With pasts like theirs, can they ever have a future?

Don’t forget to pick up your FREE copy of Blood Magic too!

Given that libraries have kept cats as far back as Ancient Egypt, it’s probably safe to assume that bookstores have had resident cats for as long as there have been bookstores. Besides stopping rodents from destroying the books, cats are a soothing presence to (non-allergic) staff and visitors, act as a store’s (or library’s) public face, and add life to what can be a sterile environment. On top of all that, cats and book people are simply a natural combination. Here’s a small sampling of the bookstore cats who keep books safe and hearts warmed…

“Magnificent” Spike lives at Left Bank Books in St. Louis, Missouri. Spike has his own page here, where you can find out fun facts about him, like his one-word description mentioned above.

Parrot, from Pegasus Books in Oakland, California, may be grumpy but she still gets fan mail. 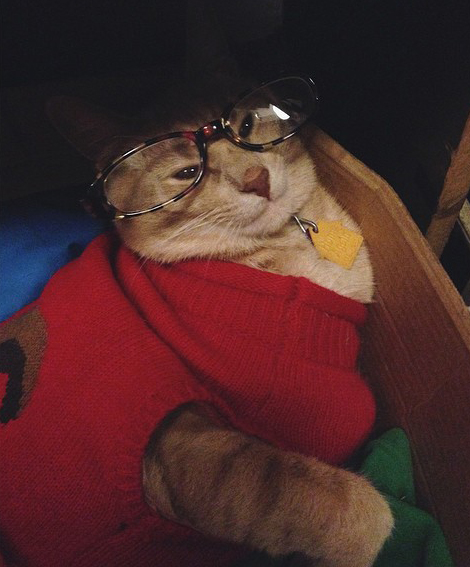 Trini Lopez (has a thing for tasty crickets)…

…and Walter Dean (the youngest and the biggest of the three). Wild Rumpus has several other store animals too, including Ferdinand the Ferret and Thomas Jefferson the tarantula (my kind of place!)

Kona Stories on Kailua-Kona in Hawaii also has two cats in residence:

Noble (once a twosome, along with “Barnes,” who found a forever home with a garden)… 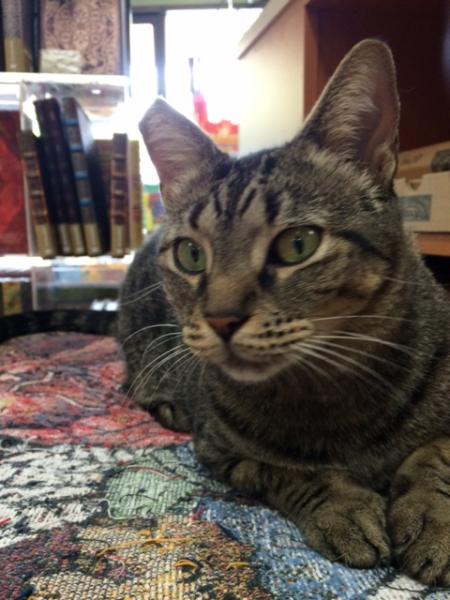 …and Chloe (who adores attention). They have their own page on Kona Stories’s website.

Copperfield’s in Healdsburg, California, is also a multi-cat store:

Sweetpea (who lives up to her name, although she thinks she’s tough)…

…and Jack (who’s a bit of a bully to visiting dogs).

Coincidentally, all these stores carry Love Lies Bleeding in paperback (and some also offer it and my FREE short story Blood Magic in ebook–check their sites.) You can also get Blood Magic here.

Does your favourite bookstore (or library) have a cat? Share in the comments 🙂 You can read more about the history of library cats here.

I recently read a great article about how travelling can enrich your writing. In it, the author outlines how travel is unpredictable, fosters empathy and reflection, and creates authenticity in your writing. All excellent points. The article got me thinking about how travelling has helped my writing, and how it can help you with your creative endeavours. Here are four more ways travelling is good for creativity, even if you go no farther than the other side of town…

1. It breaks up your routine. Even the most imaginative person needs inspiration, and nothing is less inspiring than doing the same things and seeing the same few places over and over again, day after day. Going somewhere new shakes you out of your rut, gives you a fresh perspective, and re-ignites creativity.

2. It helps you learn. If you go somewhere you’ve never been, you’re bound to learn something, whether it’s a few words in another language, facts about local history, or even a new skill (so many places now offer classes and workshops for tourists). What you discover can be the spark you need for your current project, or the impetus for something new.

3. It gives you the chance to be a different kind of creative. There are so many opportunities for creativity while you travel, and if you can do so in a way that’s not your usual, so much the better (I’ve written before about how creativity begets creativity). Take pictures, write a journal entry (or poetry or even short fiction) about your trip, sketch what you see, take part in a workshop, talk to interesting people you meet along the way. Use it all as inspiration when you get home.

4. It can help you in unexpected ways. When I was having trouble finding the right image for the cover of Love Lies Bleeding, I decided to look through my photos to see if anything would be useful. Going through shots I’d taken in Paris, I realized the statue at the base of the Medici fountain at the Jardin du Luxembourg was perfect, so I ended up using it:

(The statue at the top of the fountain is on the back cover.) Not only that, but another photo I’d taken at the Louvre became the cover for Blood Magic:

And I have a third photo in mind for my next book, which I’m currently working on. The point is, I didn’t go to Paris to take photos for my book covers, but my travels led to exactly what I needed. You never know what going somewhere new could end up doing for you.

You don’t have to travel to be creative, but it really does help. Even if you can’t make it to another country or continent, try getting on a bus and exploring a different town, or go for a walk and visit a neighbourhood in your own town that you’ve never been to. The important thing is to break out of routine and try something new. It could lead you to places you never expected.

What do you think? Has travelling helped your creativity? Share in the comments…