Book lovers are dreamers. We dream of other worlds and other lives. We dream of what we just finished reading and what we’re going to read next. We dream of homes crammed with our book collections, libraries that never close, and cozy local bookshops where we can spend massive quantities of both time and money. And some book lovers dream of entire towns devoted to books and then make them a reality. Did you know there are dozens of book towns around the world (enough that one writer even wrote a book about them)? At a time when so many events have been cancelled and travel is difficult, if not impossible, for most of us, dreaming is more important than ever. Here are five book towns to dream about (and where one day, hopefully, you’ll be able to live your dreams).

Have you been to any book towns? Which are your favourites? Share in the comments… 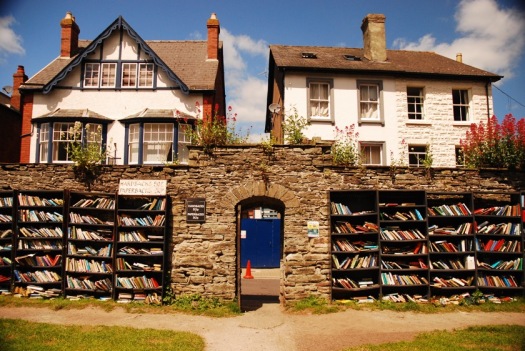 Probably the best known of all the book towns, and credited with inventing the concept, Hay-on-Wye is home to numerous book and antiques shops. It hosts the Hay Festival, a literary event that (normally) travels to other cities throughout the year (click the link to watch this year’s events online). There’s also a castle.

A Medieval village, St. Pierre de Clages is Switzerland’s only book town. The town specializes in antiquarian booksellers, but that’s not all you’ll find there. They also host an annual book festival that’s described as a must for “book lovers, amateur readers, history buffs or fans of comic books.” (No word on what’s happening with the festival in 2020, but it’s probably safe to assume it’s cancelled.)

One of the newer book towns, Featherston has already established itself as a place for book lovers. Its annual Featherston Booktown Karukatea Festival, usually held in May, was postponed, but a Words in Winter event is currently taking place until August– key features include author talks and book signings.

Located in the Catskills (New York), Hobart was essentially a ghost town not too long ago. Now it’s a dedicated book town with stores featuring books on topics ranging from American history and feminism to vintage cookbooks and craft books. Massive book sales are held on Memorial Day and Thanksgiving weekends, and Hobart also hosts their Festival of Women Writers (currently postponed but there may be virtual events).

Sidney is Canada’s only book town, as far as I can tell (something they’ve apparently been claiming since the 1990s). Located on beautiful Vancouver Island, Sidney bookstores include new, used, and antiquarian books on everything from military history to classic children’s fiction. There’s a special focus on local authors and culture, and many stores hold regular events. Most books are in English, but you can also find a good selection of Japanese and Chinese titles. There’s also the annual Sidney LitFest (returning in 2021).

These are just a few of the dozens of book towns that exist around the world (although most seem to be in Europe, hopefully this concept will catch on). You can find out about more book towns here and here.